Thrasher Opera House was built by Charlie Thrasher in 1910 on Mill Street in downtown Green Lake, Wisconsin. It first hosted vaudeville and traveling theatrical companies, but is best remembered for the movies that Charlie showed as soon as electricity became available, around 1912.

A favorite reminiscence about the Opera House is that when the mail arrived in town, the movie would stop and the crowd would go across the street to pick up their mail. When they returned, the movie would resume!

The seating arrangement was simplicity itself…wooden kitchen chairs arranged in groups of five. These Spartan accommodations deterred no one, and people came from miles around to see the movies. At other times, meetings were held there and it was also used for school functions, including plays, proms and graduation ceremonies.

The fact that the opera house was originally the hub of community activity is no surprise. When it was built over 100 years ago, the facility hosted school dances, basketball games, town meetings, and lectures. Before TV and radio, the days of vaudeville brought traveling theatrical companies to Green Lake, performing for large audiences.

As time evolved, so did the opera house. Shortly after electricity was introduced, Thrasher purchased a projection system and began showing silent films for the admission of one quarter. Audiences watched intently as a single piano player highlighted the dramatic scenes on the screen. A movie was shown every night and sometimes changed as often as three times a week. By 1929, Thrasher was showing “talkies” after he installed the proper equipment for sound movies.

January 20, 1921…”A regular good old-fashioned dance will be held at Thrasher’s Opera House on Thursday evening, January 27, 1921. The Williams Orchestra will furnish the music. It is reported that George Williams, the director of this orchestra, is an authority on the good old dances and also knows how to “JAZZ” a little to please the young people. Everybody is invited, the young as well as the old. There will be music played to please all of you.”

Charlie retired from showing movies in 1939 and lived to 99 years, warmly regarded by the community. Films continued to be shown until World War II, but eventually the building languished as a warehouse.

In 1994, Ron Hagstrom, a prominent Green Lake real estate broker with a lifelong interest in broadcasting, music and theater, purchased the Opera House and immediately began drawing up plans for a complete restoration. Alan Hagstrom, Ron’s brother and former executive director of the opera house, explained that when the building was purchased, “the decision came to either restore it or tear it down, and because of Ron’s long-standing interest in historical buildings and the arts, he wanted to give something back. He felt it was only right to restore the opera house.” 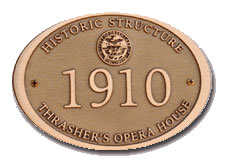 Local recollections, a restoration architect, and the State Historical Society of Wisconsin were invaluable in the restoration effort. With their guidance, the main features of the building were restored or re-created with colors that are accurate to that time period.

The restoration of the Opera House was a huge project as the building was in great decline. Remaining historically accurate as well as meeting current building codes proved to be a challenge. In addition, only one photo of the original interior could be found. That photo, along with some hidden existing details, helped piece things together.

After a stenciled pattern was found in the stairway leading from the balcony to a crawl space, two local artists donated their time and recreated the design. It now surrounds the interior. 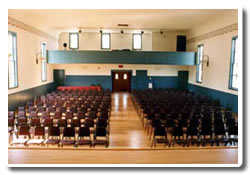 During the restoration, a pleasant surprise was discovered: a piece of wood installed near the stage door had been signed by every member of the cast who performed at the last play held there in 1945. The play was “You Can’t Take It With You”. Alan had this memorabilia framed and it eventually prompted him to start an historic album of every play performed there in the future. All of the students who participate in the plays will sign the book, adding a bit of themselves to Green Lake’s history.

The inside of the building, cream colored with accents of maroon and federal blue, features an embossed tin ceiling, a stenciled pattern along the walls, a hardwood floor, and a projection balcony. The stage has been re-floored and a missing proscenium has been replaced. The ticket window is back in its original location. Though a classically simple building on the outside, it is softly beautiful inside. Experts have rated its acoustics as excellent. Audiences and performers love the sound.

The animation to the right takes you through the stages of the restoration work. The images may take alittle time to load into your browser, but it’s interesting. Watch as a pile of lumber turns into the beautifully restored Thrasher Opera House… 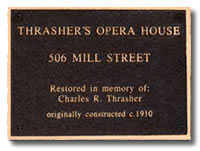