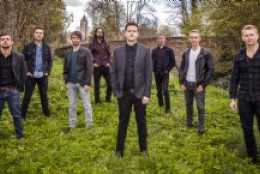 Twice winners of Scotland’s Traditional Music ‘Live Act of the Year’ Award (2016 & 2011), SKERRYVORE have been on a meteoric journey that has taken them from the remote Isle of Tiree on to International tours that have included performances in Central Park NYC, The Ryder Cup Louisville and the Shanghai Expo, China.

SKERRYVORE create a unique fusion of folk, trad, rock and Americana that represents all the different personalities and upbringing of the 8 band members who hail from different regions of Scotland.

Formed in 2005, the band marked their 10th anniversary in 2015 with a ‘Decade’ concert at Mossfield Stadium, Oban. After selling 3,000 tickets in ninety minutes, the capacity was increased and 6,000 visitors from all over the world enjoyed SKERRYVORE, joined by a host of guests including Dougie MacLean and legendary Irish musician Sharon Shannon.

The success of the Decade concert led to the creation of the band’s own annual festival, Oban Live that has now attracted over 10,000 attendees to enjoy international acts including KT Tunstall, We Banjo 3, Julie Fowlis and Capercaillie alongside SKERRYVORE.

2017 saw the release of the single Live Forever that provided the soundtrack for the Scottish tourism promotional campaign ‘Wild About Argyll’ and saw the single hit No.1 in the iTunes World Music chart. This was followed by the launch of the Live Forever Tour that has the band performing over 70 shows in the UK, Italy, Spain, Denmark, Netherlands and the United States.

2018 will bring the release of SKERRYVORE’s 6th studio album accompanied by a global tour that will include a headline performance at the legendary Tonder Festival, Denmark.