Socks in the Frying Pan 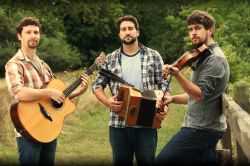 Socks in the Frying Pan

Hailing from the Irish music mecca that is Ennis, County Clare the ‘Socks sound’ came as a bi-product of three friends playing in pubs together, learning from one another and having fun. An album was the inevitable next step-their first unassuming entry into the world of Irish music recordings. Fast forward one year later and the album had won ‘Album of the Year’ from the Live Ireland music awards and the band scooping up the award for ‘Best New Band’ from the Irish Music Association.

Five years and two more multi-award winning studio albums later, the band have headlined all of the major Irish music festivals in America and have branched into the broader world music scene, performing at the likes of the Walnut Valley Festival in Winfield Kansas, the Tønder folk music festival in Denmark and alongside such acts as Sting, Aretha Franklin and Rod Stewart at the world famous New Orleans Jazz Festival to name but a few.

Due to unprecedented demand from fans globally, they are back with their first live recording to capture not only the virtuosic musical abilities and their pitch perfect harmonies, but the fun, the joy and the life and soul that goes into each live performance. Recorded in front of a sold-out capacity crowd at Glór theatre in their hometown of Ennis, the Socks are launching ‘Raw & Reel’ across the US and Canada during their 2020 tour.