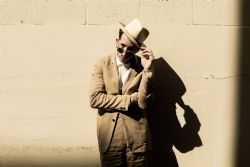 Last minute tickets may be purchased at the door.

Fusing the rustic sounds of the past with his own wry humor and roots music sensibilities, singer/songwriter Pokey LaFarge makes music influenced by old-time country, blues, folk, and Western swing. A wide-ranging troubadour since the mid-2000s, LaFarge gained greater recognition in 2012 touring with Jack White. This recognition paved the way for 2015’s Jimmy Sutton-produced Something in the Water, which peaked in the Top 30 of the Billboard Top Country Albums chart. 2020’s Rock Bottom Rhapsody was a boldly eclectic collection that fused strong contemporary influences with LaFarge’s retro sound, a maturation he further showcased that year with In the Blossom of their Shade.
“Limiting myself to a genre has never really been my thing,” says Pokey LaFarge. “I’m most purely a rambler. I’m traveling the world all the time, and my songs have been directly influenced by my travels. You’re liable to hear something in my songs that sounds like traditional jazz; next thing you know, you might be hearing something that sounds like Bob Dylan’s Nashville Skyline mixed with the chanson singers of France, or a waltz mixed with cumbia, or soul mixed with swing.”