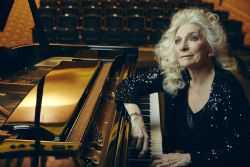 Judy Collins has inspired audiences with sublime vocals, boldly vulnerable songwriting, personal life triumphs, and a firm commitment to social activism. In the 1960s, she evoked both the idealism and steely determination of a generation united against social and environmental injustices. Five decades later, her luminescent presence shines brightly as new generations bask in the glow of her iconic 55-album body of work, and heed inspiration from her spiritual discipline to thrive in the music industry for half a century.

Judy has also authored several books, including the powerful and inspiring, Sanity & Grace and her extraordinary memoir, Sweet Judy Blue Eyes: My Life in Music. For her most recent title to be released in 2017, Cravings, she provides a no-holds barred account of her harrowing struggle with compulsive overeating, and the journey that led her to a solution. Alternating between chapters on her life and those of the many diet gurus she has encountered along the way (Atkins, Jean Nidtech of Weight Watchers, Andrew Weil, to name a few), Cravings is the culmination of Judy’s genuine desire to share what she’s learned—so that no one has follow her heart-rending path to recovery.

In addition, she remains a social activist, representing UNICEF and numerous other causes. She is the director (along with Jill Godmillow) of an Academy Award-nominated film about Antonia Brico – PORTRAIT OF A WOMAN, the first woman to conduct major symphonies around the world–and Judy’s classical piano teacher when she was young.