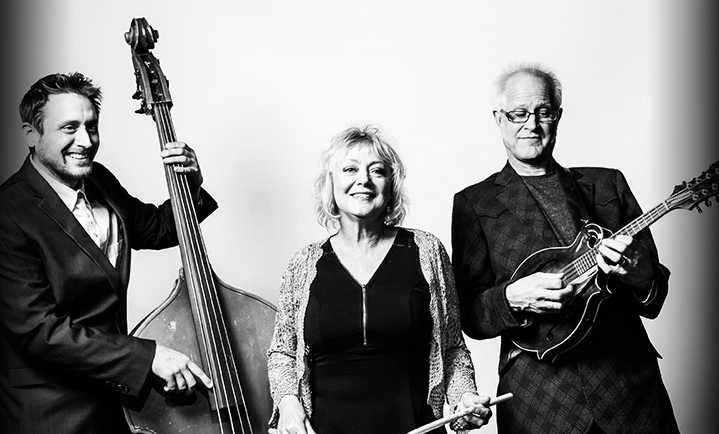 The members of Harmonious Wail are purveyors of Americana-infused Gypsy Jazz, who continue to take their listeners on a ride via the music of the Hot Club sounds of Parisian cafes, to the deepest blues of the Memphis Delta, to the heartfelt folk scenes across every-town-America. This harmonious clique are sublime entertainers, great educators, and lifters of spirits.

Harmonious Wail is a trio of multi-award winning musicians. Sims Delaney-Potthoff, a mandolin virtuoso, and vocalist, Maggie Delaney-Potthoff, vocalist extraordinaire, whose percussive instrument of choice is a cardboard box (but who can also rock almost any household object), and Jeffo Weiss, a master bassist who dazzles and mesmerizes on both upright and electric 5-string bass.

These illustrious, yet humble artists vow that every performance is played from the heart and infused with a perfect balance of inspiration, emotion, wit and storytelling. The Wail celebrates 10 recordings in its 30+ years of existence and is currently kicking off its 4th decade releasing two new CDs simultaneously! One  project showcases Harmonious Wail’s original compositions, and the other is a collection of Gypsy Jazz standards recorded in collaboration with some the world’s  leading Gypsy Jazz All Stars.

As stewards of the Gypsy Jazz genre, they have established the Midwest Gypsy Swing Fest, held twice a year in Madison, Wisconsin.  They also offer to take the fest on the road as a special concert package. They have mastered a plan on how to bring amazing Gypsy Jazz All Stars from around the world, and place them in front of concert audiences throughout the United States.

Their gracious approach to music and storytelling translates beautifully for any musical education outreach program. They are as illumined off stage as they are on. And their skills are tailored to fit groups of varying skill and age.  Popular topics have included; ”The Instrumentation of Gypsy Jazz,” “How to Succeed in the Music Biz,” and “Maggie’s Method™: If You Can Speak You Can Sing.”

Never a dull moment, the philanthropic trio has also established The Henry Mac Fund. The fund was created in March of 2015 in memory of Sims’ and Maggie’s son, Henry. Henry was a superb musician who will not be forgotten, as funds are awarded annually to a young, upcoming musician who is looking for support to move her/his musical career forward. These young musicians will continue to help make the world a better place through music. The funds are awarded every June at the Madison Area Music Association awards ceremony. (The MAMA’s).

Not only a touring band, the ever-reaching Harmonious Wail has worked with National Public Radio, performing on multiple shows and even donating pertinent songs for NPR to use in annual fundraising campaigns. Their music has been placed in films, and they recently received the 2017 Musicnotes Outstanding Musical CareerAchievement Award.

Helen Gillet will be opening the show.  Helen Gillet is a singer-songwriter and surrealist-archeologist exploring synthesized sounds, texture, and rhythm using an acoustic cello.  For someone with her varied background, New Orleans, with its mix of cultures and musics, seemed like a natural place to call home.  She was born in Belgium, raised in Singapore from the ages of 2 to 11, and routinely shuttled between the homelands of her Belgian father and American mother.  Over the years — working in New Orleans with musicians of all stripes, from avant-garde jazz and classical to pop and funk — Gillet has developed a singular polyglot style. The core of her work is solo performance with live looping, layering cello parts and vocal lines. Rhythmic figures emerge with bowed or plucked ostinatos or a variety of rubbing and slapping on the body of the cello, then enhanced with melodies played or sung in her haunting alto. Her mixed musical vocabulary is commensurate with her disparate travels — French chanson of the 1940s, Belgian folk tunes sung in Walloon, a mix of rock and punk from the likes of PJ Harvey and X-Ray Spex, and her own affecting originals, like audience favorite “Julien,” sung in a mix of French and English. Gillet’s solo performance is known for its enigmatic quality as she fabricates each song with innovative use of the cello and true mastery of live looping technology.