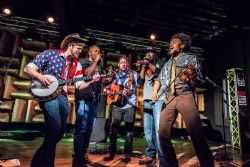 Please note that the “Mask Required Policy” will still be in place for this concert. Masks will become optional March 5th and beyond. (As always, check back often for any changes).

“There are a lot more people out there with Jay-Z and Johnny Cash on their playlists than you think,” says Gangstagrass Mastermind Rench, who had previously made a name for himself as an in-demand Brooklyn country and hip-hop producer and singer/songwriter. He should know – he’s toured the country and abroad with a band of bluegrass pickers and hip-hop MCs to the delight of standing-room crowds everywhere.

Making beats for local NYC rappers and hosting country music nights in popular NYC venues, Rench had a musical itch that needed to be scratched – he was listening to the 1970s recordings of Ralph Stanley and the Clinch Mountain Boys and couldn’t help imagining what classic bluegrass would sound like with rap vocals and beats. The result was a genre-demolishing blitz called Rench Presents: Gangstagrass. He put it up for free download and people took notice. Hundreds of thousands of downloads followed creating an intense underground buzz. When FX Network came to Rench looking for the Gangstagrass sound for the theme song to their new series Justified, he had bluegrass players lay down an original track with rapper T.O.N.E-z, the younger brother of early hip-hop legends Special K and T-LaRoc.

Their 2020 offering, No Time for Enemies – which features “Nickel and Dime Blues,” the inspirational “Freedom,” the jump-starting “Aint No Crime,” and the hugely popular “Ride With You” – has more than a million streams/views so far. It quickly hit #1 on the Billboard bluegrass charts. No Time for Enemies takes you for a ride through the hoods and hollers while having a sweat of a good time.