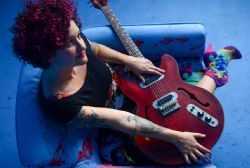 In the spirit of shared safety for the band and audience, so everyone can relax and have fun, Carsie is requesting that we check vaccination cards or negative COVID test result status upon arrival of all guests.    Thank you for your cooperation.

Buck Up, the new studio album from singer and songwriter Carsie Blanton, opens with a siren. The warning – or call to (dis)arms – segues into the first notes of “Twister.” Finger snaps alone accompany Blanton’s smoky vocals, before piano, upright bass, cello, trumpet, and drums join the proceedings.

Over the past dozen years, Blanton has been making music that personifies play. Her work has been called “impeccably catchy” by critic Robert Christgau, with musician John Oates admiring her songs’ “sly wit and urbane imagery” that remind him of Cole Porter.